Past love interest of Akria Tsubaki, who she unsuccessfully tried to form a drool bond with.

Aika Hayakawa (早川 愛香 Hayakawa Aika) is a pretty girl who was Akira's classmate and first crush in middle school (junior high school). She knew of his deep, intimate feelings for her, but never acknowledged those feelings of love, thus affecting an unrequited love shipping from Tsubaki to her. After middle school, she eventually attended a different high school, an all-girls business school, from the one Tsubaki attended.

Hayakawa is a petite, attractive teenage girl, originally with long, waist length jet-black hair, that Tsubaki has known since they were both in middle ( Jr. High ) school. She is somewhat short, but has an almost perfect 'Barbie Doll' body size and shape. She has a round face, big 'anime girl' oval eyes of a medium lavender color, and a creamy, even beige skin tone. She now has short jet-black hair with dark gray highlights, and wears it in a Beatles mop cut. She has a medium size bust, but it looks larger given her smaller chest frame. She has short arms and small hands, short but lean and trim legs.

Hayakawa has always dressed and groomed herself in the 'kawaii' ( super cute ) fashion style, and was very popular in middle school with the boys because of that. She is most often seen wearing her high school uniform of that of a young professional woman's business suit, consisting of a dress blouse, a tie, a business jacket, a mini-skirt, and black knee-high socks. For casual wear, she wears the latest, hottest high class fashion for teen girls. Sometimes dressed provocatively, she always makes an impression of style and class wherever she goes. Throughout her teen/tween years, by her fashion style and appearance, Aika Hayakawa has reached the remarkable achievement of the almost impossible fashion and social accomplishment of simultaneously presenting herself as stunningly cute, hardcore sweetness, and with a very noticeably surreal, innocent demure and appearance, but also coming off as stunningly edgy, hardcore sexy, and with a very noticeably surreal, erotic demure and appearance, both at school, and out in public. She now attends an all-girls high school, but still maintains her well groomed, tasteful, and professional looking fashion style. She was initially long-haired, but in Anime Episode 10 / Manga Chapter 28 she meets Tsubaki once again, and shows off a new hairstyle wherein she has cut her hair short.

However, at Hayakawa's Hoshinome Cultural Festival, wherein she meets Tsubaki, who is to pretend to be her boyfriend, she wears an exact duplicate of her middle school jumper dress school uniform, and has a long, black wig, so that she looks exactly as she did a few years ago. Finally, it is confirmed that Hayakawa has an almost perfect 'teenage fashion model' body size and shape, when Tsubaki and Urabe both see her unclothed, as part of a very combative challenge game of 'Do or Die' / 'Put Up or Shut Up' that she participates in with Urabe in an empty, unused classroom, during the Hoshinome Cultural Festival. Later at the Cultural Festival, she again dons her middle school female school uniform, and when Seo sees her, he is quite taken aback by Hayakawa presenting herself to him with her 'little girl' cuteness, attractiveness and sweet innocence.

To everyone else, Hayakawa is a pleasant, popular middle school and high school student, who enjoys life and loves to socialize with friends and have fun. However, Hayakawa, inside, has low self-esteem and little self-confidence in her abilities. Although socially active, and the center of many boy's attention, she actually finds it difficult to form any kind of close and personal relationships. She has been interested in several boys, but all of her efforts to express her love and affection towards them have turned out to be unrequited love. This leads her to often feel lonely and dejected, and will seek out anyone she can try to talk to and trust. As such, and since Tsubaki had a crush on her, she also hoped to restart a relationship with him, when Tsubaki told her that he still was single. Plus Tsubaki told her that he did not have a girlfriend, when in fact he was already in a relationship with Urabe. She is not afraid to let her frustrations out and seek comfort when she is with Tsubaki. However, she has a very possessive personality, and is not below using jealously, deceit, and deception to entice a boy to want to help her and do her bidding.

When Hayakawa's school has the Cultural Festival, she even stoops to faking a bruise to trick Tsubaki to pretend to be her boyfriend for a day, and setting it up so Urabe will come to the school's summer festival during that same day. Hayakawa wanted to separate Tsubaki from Urabe, long enough to, once again, attempt a Drool Bond with him. She also wanted to spite the boy that she had shipped with into shame and regret, not to mention her wanting to be 'ticking off' Urabe. However, at the festival, things do not go as Hayakawa had planned. Hayakawa is then forced to show her true competitive and combative nature, held in reserve until now, when she and Urabe go head-to-head in a battle to gain Tusbaki's attention and admiration, even literally 'baring all' of herself to do so. The somewhat disappointing outcome of hers leads her to reconsider her relationship with a former unrequited love interest, named Seo, and after forming a drool bond with him, the two begin shipping again with one another on a whole new, deeper intimate level. Hayakawa finally has what she yearned for all this time, a boyfriend, Seo, and girlfriend, Urabe, both of them having a socially intimate relationship with her, founded on a Drool Bond.

Another note about her personality is that she and Tsubaki have similar quirks and behavior, which is why he developed a crush on her to begin with. At the moment, she studies at the Hoshinome Girls' Academy, which is a girls-only business oriented high school.

Aika Hayakawa with her long hairstyle.

Hayakawa in her school uniform, with her long hairstyle.

Hayakawa at the School Festival, wearing her business uniform, and with her long black hairstyle.

Hayakawa at the School Festival wherein she wears her Middle School uniform and a long black wig.

A very rare offer made to Tsubaki to taste another girl's drool, that of Hayakawa's. 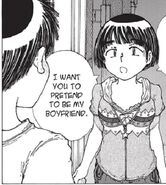 Hayakawa asking Tsubaki to pretend to be her boyfriend all day at the School Festival, presenting herself with her blouse unzipped to reveal her lacy bra. 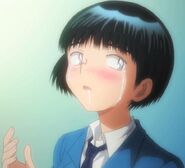 The trigger point for Tsubaki---seeing Hayakawa crying and drooling while they are sitting on a park bench together.

Hayakawa in her short hairstyle.
Add a photo to this gallery
Retrieved from "https://mysteriousgirlfriendx.fandom.com/wiki/Hayakawa_Aika?oldid=7618"
Community content is available under CC-BY-SA unless otherwise noted.