CHAPTER 57 OF THE MANGA

( Story note---Remember, the individual manga chapter stories are not in chronological order. That is how the author, Richii Ushiba wrote the series, and how it was published. This chapter's story takes place when the seasons change from spring to summer. )

It's late May, and all of the other girls have changed into their summer uniform, except Urabe ! But the fact that she stopped by the dry cleaners to pick up a certain summer uniform on the way home is a good indication to Tsubaki that she will do so soon. But an unexpected encounter with Ueno leaves Urabe by herself, and Tsubaki, along with the summer uniform, following Ueno. Alone in his bedroom that night, Tsubaki eyes the uniform, even taking it out of the cellophane package and hanging it on the wall. When Youko knocks on his door, he quickly tries to hide it, but not before he spills coca juice on it before it gets shoved under the bed. Now what is Tsubaki going to do about that?

He was supposed to drop it off to Urabe early the next morning, and a summer uniform does get dropped off that morning, but it is Youko's summer uniform, not Urabe's. The two uniforms are identical, and Urabe even declares that Youko's uniform fits ! All is well ( as long as Youko doesn't find out her school uniform is missing ! ), until that afternoon when Urabe and Tsubaki do their daily drool routine. Tsubaki does the drool taste, but sees Youko, his sister, as the person giving him her drool. Not only that, but Tsubaki receives a premenonition that he will get to kiss Urabe this summer, but if Urabe is wearing Youko's summer uniform, then he will, in a sense, be kissing his sister ! Not something that Tsubaki wants to do under those circumstances. But why is Youko's aura so strong with her school summer uniform ? It's because, unknown to anyone, Youko still occasionally wears it around the house, when no one else is at home ! It still fits, and she admires herself in the mirror when she does that !

Urabe and Tsubaki are walking home from school one day in late May, but Tsubaki is in a world all his own. He is both rejoicing and complaining at the same time. Why ? Because with the advent of the warmer weather that comes with the change of seasons from spring to summer, all of the female students have changed into their summer school uniform. You know, lighter color, shearer fabric, shorter above-the-knee and mini-skirt hemlines, bare legs ! All except one girl---guess ! Bingo ! It's Urabe ! She is still wearing her winter uniform. Resigning himself to Cruel Fate, he is nonetheless surprised that Urabe wants to take a detour from their normal route home. She wants to stop by the dry cleaners to---guess what !---pick up her summer sailor suit school uniform ! Tsubaki holds his breath and asks if Urabe is going to make the change tomorrow ? Joy of joys, that is what she is going to do ! Urabe then asks him to hold the cellophane package containing the fuku ( sailor suit ), while she buys drinks for the both of them from a vending machine.

But when Ueno is seen coming on his bicycle this way, Tsubaki quickly asks Urabe to duck out and hide, lest he guess that they are together because they are intimate boyfriend and girlfriend. Urabe scoots around to the back of the vending machine. Ueno insists that Tsubaki accompany him to go shopping downtown. Urabe peeks around from the back of the vending machine only to see Tsubaki on the back of the bike, giving her the sign that he will be preoccupied. That evening, Tsubaki phones Urabe from a public phone booth to ask her about dropping off her school uniform tomorrow morning. That will be fine !

Alone in his bedroom at home, Tsubaki begins to cave in to questionable reasoning and quirky desires. He takes the uniform out of the cellophane wrapping so that he can smell it. ( It smells like dry cleaning ! ) Next, he puts it on a hanger and hangs it on the wall of his room. ( See the OAV anime Otaku no Video to understand the significance of having a girl's sailor suit uniform hanging on the wall ! ) Staring at it (thinking of hugging it ?), suddenly, Youko is knocking on his door. Quick ! Where to hide it ? Under the bed !!! But Cruel Fate strikes again, as an open bottle of coca berry juice is bumped, and juice is spilled all over Urabe's school uniform. Nevertheless, under the bed it goes ! Youko opens the door and drops off clean clothes. Tsubaki pretends to be lounging and leaning on the side of the bed reading a movie magazine ( he is holding the magazine upside down !!! ), as Youko leaves the clothes on the floor. With her gone, Tsubaki surveys the damage. What to do ? What to do ? A bold and adventurous idea comes to mind !

Next morning bright and early, Tsubaki is at Urabe's apartment door, holding on to a package. Urabe answers, and unlike Urabe's uniform, Tsubaki 'comes clean' about what happened. Surprisingly, Urabe is quite understanding about the whole sordid affair. She tells him that she will just continue to wear her winter uniform until the summer one can be cleaned again. Tsubaki offers an alternate plan, that Urabe wear Youko's high school sailor suit summer uniform, since they are about the same body size, and the uniforms are identical. Asked if his sister knows that he borrowed her sailor suit uniform, Tsubaki squeaks out a " Well . . . . . . . . . "

Urabe changes into Youko's uniform, and gives the thumb's up to Tsubaki while they are walking towards the school. That afternoon, on the way home, they stop at their special bridge for the daily drool routine. However, another image is piggy-backed onto today's drool from Urabe. For a few seconds, Tsubaki sees Youko, his sister, supposedly giving him a taste of her drool. ( It is strongly implied by the entire story line that Youko also has drool bond capabilities. See here under the name Youko. ) Tsubaki tries to regroup. Then, for a second time, the image of Youko seems to fade in and out in between the reality image of Urabe. Tsubaki gives a wild 'yelp' that draws Urabe's concern. However, Urabe states that she may wear Youko's sailor fuku for a while, since it feels so good on her ! Tsubaki's reaction to that is swift and forceful---No, No, No, No, NO, NO, NO !!!!!

This because he has just had a bold premonition presented to his mind. The premonition is such that he seems to feel that sometime this summer he will have the opportunity to kiss Urabe for the first time ! But if she is wearing Youko's sailor fuku, then he will experience the same odd perception that he just had today. He will be seen as and will experience kissing his sister, Youko, and not Urabe ! To cover and hide his thoughts, Tsubaki merely tells Urabe that she has to give Youko's uniform back ASAP, because Youko does not know it is missing right now. One last time he looks at Urabe, and sees Youko, this time Youko is wearing the sailor fuku, and her hair is done up in twin tails !!! 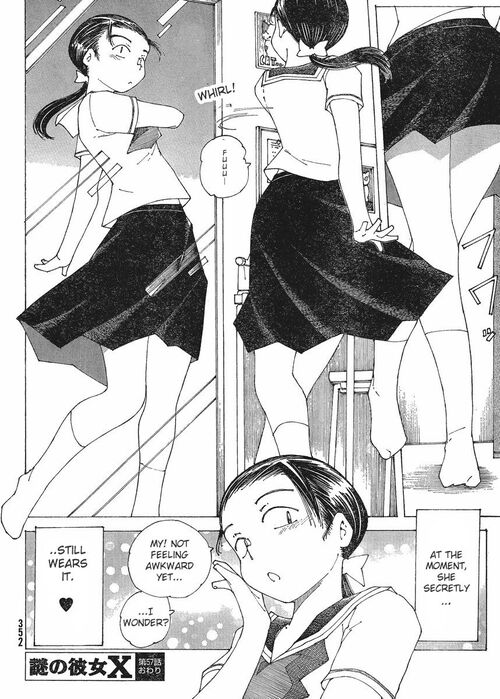 Akira Tsubaki knows that his older sister still had her high school sailor suit summer uniform, but he knows only half the story. Why is Youko's image so strongly associated with her sailor suit uniform, such that today at the drool routine, he sees Urabe as Youko ?

Youko Tsubaki has a very wonderful and pleasurable, but very private secret. When she is alone in the house for a while, she will change into and wear her high school sailor suit school uniform, and wear it around the house, as well as admiring herself in the mirror. It still fits !