Ladies and Gentlemen ! I am Tsubaki-Sensei, leading the investigation on Urabe Mikoto, my mysterious girlfriend x. To celebrate the release of Volume 4 of Mysterious Girlfriend X, I've come to reveal what has never been revealed before ! I will now present you my report on MGX's special moves !!!

Urabe's Most Unusual and Special Feature is the ability to Drool Bond.

However, Urabe has six special techniques:

In Manga Chapter 26, she performed her lethal move with both hands ! Two pairs of scissors equal twice the destructive power ! Maybe she felt like Goeman from Lupan III, whose famous phrase reads, " Again I have cut a worthless object ". Maybe she was whispering that [phrase] inside her heart !

Urabe usually wears white panties, but in Manga Chapter 11, she was sporting some dark-[colored] ones, [as well as a black garter belt and black stockings.] In Manga Chapter 14, she had a fan tucked next to her scissors. It seems that she likes to carry other things besides her scissors.

Tsubaki is speaking . . . . " So, ladies and gentlemen, what do you think of my report ? From now on, I do not know what new moves my mysterious girlfriend x [will] perform over the course of the story. But rest assured, for I will continue my research ! So you are all [only] too welcome to read my next report in the following vol . . . . "

Tsubaki shouts . . . . " THAT'S NOT RIGHT, URABE !! EVERY SECRET MOVE MUST HAVE A NAME ! ALL THE SPECIAL MOVES HAVE COOL NAMES !! AND IF POSSIBLE, YOU'VE GOT TO GIVE THEM NAMES THAT ARE CATCHY AND EASY TO REMEMBER ! I'm going to tell you what I think your [most powerful] move should be called ! "

( Tsubaki whispers something into Urabe's ear, with the following result . . . . ) 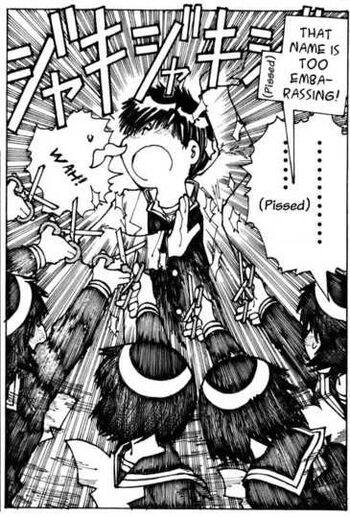 The chapter is presented as a bit of humour, so the names and explanations are to be taken as a bit of a joke.

Playing in the Snow 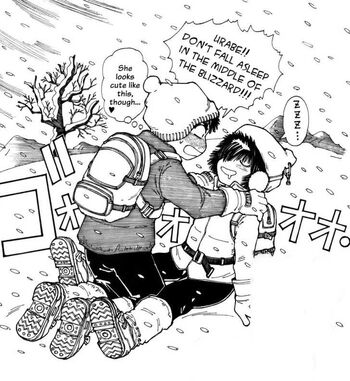