Scissors are Mikoto Urabe's weapon of choice. Except for a few rare occasions where she has drawn a minor amount of blood, she does not hurt Tsubaki with her scissors, she only scares him by cutting up a nearby object, reducing it to shreds. In one chapter of the manga, she finds Tsbuaki's stash of adult girly magazines, and cuts all of them into confetti, using a scissor in each hand. In Chapter 74 of the manga, Tsubaki grabs Urabe from behind, thinking that a cartoon snake is hovering above her and ready to attack. This only triggers a panty scissors attack from Urabe. However, she only scares him, and not cutting up anything nearby. Wonder of wonders; he gets to see that Urabe has changed from wearing white panties, as she has always done up to now, to now wearing super cute white and pink-striped panties ! 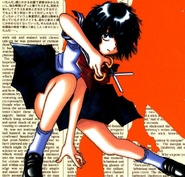 Add a photo to this gallery

Oka is very curious about Urabe's hobby, and wants to see it so badly that in episode 11 she snaps a naked photograph of Urabe to make Urabe angry enough to take out her scissors to destroy it (Urabe had adamantly refused to demonstrate the skill).

In episode 12 it is revealed that she is trying to learn the skill herself, unfortunately by practicing it on her boyfriend Ueno. In the progress of trying to give him a haircut, the scissors went flying out of her hand and stabbed him in the forehead.

This gave Ueno an injury similar to the one which Tsubaki received when Urabe accidentally stabbed him in the head with her scissors in the progress of cutting up his handkerchief, which she did because she was angry that he tried to hug her without asking permission first.

After injuring Ueno, Oka did not give up her scissors habit, and actually had him hold gauze between his hands as she stabbed at it with scissors to try and cut it into a proper size for a bandage. This gave Ueno lots of extra gauze clippings which he volunteered to give Tsubaki as a replacement for his, which hadn't been changed.

Add a photo to this gallery
Retrieved from "https://mysteriousgirlfriendx.fandom.com/wiki/Scissors?oldid=7479"
Community content is available under CC-BY-SA unless otherwise noted.