View source
watch 01:36
We're Getting Mutants in the MCU - The Loop
Do you like this video?
Play Sound

Acting mother to the Tsubaki family / Ex-Girlfriend of Arima

Youko is Akira Tsubaki's elder sister. She is seven years older than him. After the demise of her mother, she has voluntarily taken over the role of that of a mother and caregiver to the family.

Youko is a tall girl, who looks much younger that the 24 years that she actually is, at times, giving the impression that she is still in high school, or recently graduated. Like the other Tsubaki family members, she is trim and thin, without looking anemic or sickly. She has very long legs, and an average weight for her slim body size and shape. Youko has a somewhat round face, but with a high forehead. She has the same dark brown eyes like her brother, but has big 'anime girl' eyes that are very expressive. She has a lighter skin tone, evenly throughout her body. Her hair is long and straight, black with very dark brown highlights, almost always worn in a single ponytail held with a huge bow. She used to wear her hair in cute, sexy twin tails, but set aside that hairstyle when she graduated from high school. Youko has a larger bust, but thin arms and legs.

Youko dresses nice and attractive, but somewhat plain and ordinary, since she spends most of her time at home taking care of domestic duties. She always wears pretty dresses, or a nice shirt and a pencil skirt. Many times she is wearing an apron, since a lot of her time is spent in the kitchen. However, once in a while Youko will, whether she realizes it or not given her youthful appearance, dress a bit on the sexy or alluring side. One time at home she chose to wear a clingy, tight fitting black sweater, a denim mini-skirt, and black tights, which drew a profound admiration and provocative comment from visiting Ueno, much to the ire of Akira Tsubaki, her brother and Ueno's best friend. Youko also carries a fashion secret and desire with her. She will, when nobody is at home, change into her high school sailor fuku ( sailor suit ) mini-skirted school uniform ( it still fits ! ), and not only admire herself in the mirror, but will wear it around the house for the rest of the day.!

Although Youko is not married, and has never had children, or even sex for that matter, she still is the perfect example of a wife and mother. She is level-headed, mature, kind, self-sacrificing, gentle but firm, peaceful, and content with the circumstances in her life for the time being. However, Youko is not above scolding or criticizing Akria when she sees the need to do so. Although she herself is open and honest, Akria is not above concealing things from her, like how far into a shipping he is with Urabe, or that they are Drool Bonded to one another. Youko is very much devoted to her family, consisting of her brother and father, as well as showing devotion to her deceased mother.

Youko is very observant, and does things the right way and on time. She probably has the smarts to take care of the family's financial duties, instead of her father doing so. She considers it her duty to raise her brother properly in place of their deceased mother, and refuses to consider dating or getting married until he graduates and finds a good job. She has met Urabe, but may not know the deep extent of Urabe's relationship with her brother. She spends most of her time at home doing housekeeping and other domestic duties.

Without knowing that he has a girlfriend, Akira's occasional strange behavior from the effects of Urabe's saliva sometimes makes Youko worry about her brother. Youko has met Urabe, but has not been told of the full extent of her relationship with Akira. Urabe said she was only a classmate Akira helps often at school, though some dialogue suggests she knows the truth.

It is strongly implied in the manga that Youko knows, since at least middle school, that she has the potential for being able to form a drool bond with another person, but she has chosen not to do so. She had a boyfriend in high school, but never formed a drool bond with him, probably because he could not form such a bond with Youko, or that she never attempted to do so. It may be that she views the drool bond as a genetic defect that she is ashamed of. Youko probably knows that Akira has the same ability to drool bond, but it is unclear if she has ever mentioned it to him, or if she knows if or how he became addicted to Urabe's drool.

Later in the series, Youko get to meet her boyfriend of the high school years. They spend some time together, however, this takes a heavy toll on her emotionally speaking. So much so that she confides in Urabe, when the two of them share a bath together at a public bathhouse. Eventually. Youko comes to know what she may have suspected all along, that her younger brother, Akria, is now and has been dating Urabe for quite some time now !

From the picture below, Youko would wear her hair in a Twin Tail style during her high school years.

How Youko looked at seventeen years old when she dated Arima and attended the same school that the main characters do. 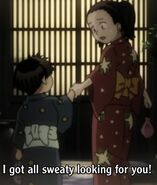 In OVA, Akira has a flashback of Youko taking him to a festival.